Creative marketers tend to tweak stuff. You should see what some of them are doing (and you will in this post) with their referral campaigns.

When you build marketing software, you tend to think your customers will use it "as intended."  However, some power users (not all, but some) get creative and bend your product toward their own will, doing all sorts of things you didn't anticipate. And that's fun to watch.

We've seen this happen with Friendbuy and I'm very happy to report there have been  some really creative referral programs that veer a little outside the "traditional" way of running them.

A beautiful thing happens when a marketer's imagination collides with your platform capabilities -- you see a slew of fresh and interesting twists.  Below you will find some customer referral program ideas that have bubbled up and caught our attention.

Huckberry found a way to augment their ongoing, evergreen referral program by introducing periodic referral contests. Last April, they ran one that not only offered their standard $10 reward for each referred friend, but the person who referred the most friends during the campaign won $1,000 bucks. Second and third-place winners also got a nice little bonus.

They started by promoting their contest with the following standalone email blast to their entire list: 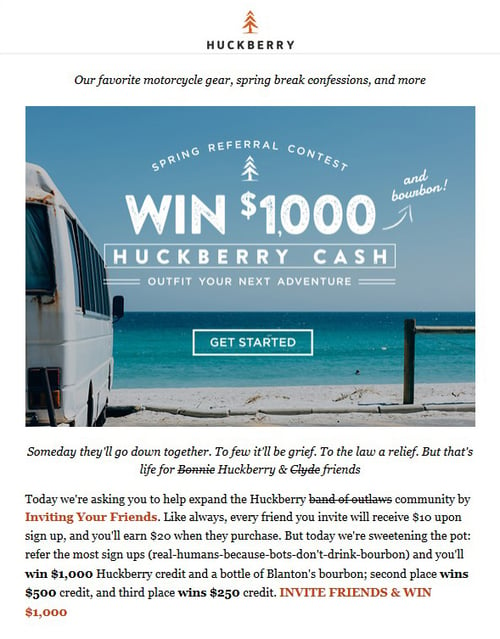 Customers who clicked on the email were driven to the following referral widget that reiterated the rewards and rules. If you look closely, you'll even notice some attention given to the bourbon prize. A nice touch.

Naturebox invited their participants (sharers) to send out a "50% Off" offer prior to the Super Bowl. It's pretty smart to tap into the biggest media event in the United States.

Before you dismiss the notion that there's no connection between healthy snacks and football (the game itself and the viewers who you'd assume would bury their heads in booze and hot dogs all day), one must remember that this is the day when nearly half of American households tune in. Suffice it say, this is a pretty big day for snacks. Even healthy ones. 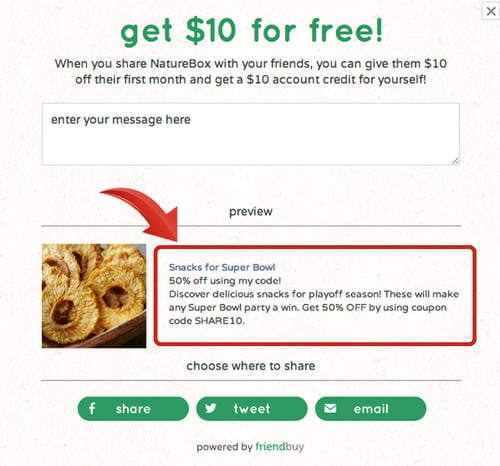 Here's a referral campaign idea that combines seasonality with a contest. It's from Huckberry, whom I am leaning on pretty heavily in this post - these guys are prolific with their widget creation!

Huckberry wanted to give referrers a shot at flying home for the holidays for free, with a bag full of Huckberry gear and a seat in first-class. Pretty sweet.

What would you say if I told you that one of my favorite referral program ideas was one that offered end users no reward at all? Enter social gifting.

Try The World sent emails to their customers that included each recipient's referral code that they could share with friends. What's different here is that there was no incentive for the referrer. Nada. Just a really nice way to be generous and offer a friend a free trial. Each participant could send a code to anyone of their choice and up to 3 of those friends could cash in. 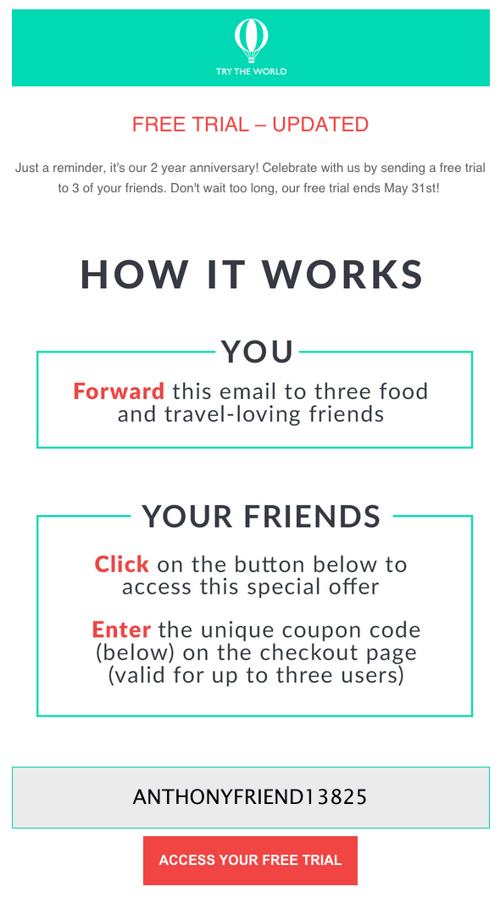 Here's another hybrid campaign that combined social gifting with a contest. YogaWorks encouraged customers to give their friends 7 free days of yoga. There was also a kicker: referrers earned extra contest entries for each and every friend who activated their free trial.

Well here's a twist - on their checkout page, MeUndies offered their customers a free gift with their order if they shared with friends. Their friends would get 20% off for trying MeUndies.

What's odd (in a really good way) is that the sharing rate for this widget was on the very high end of referral benchmarks, even though "free gift" is a pretty vague incentive, don't you think? Yet it worked. Really, really well. 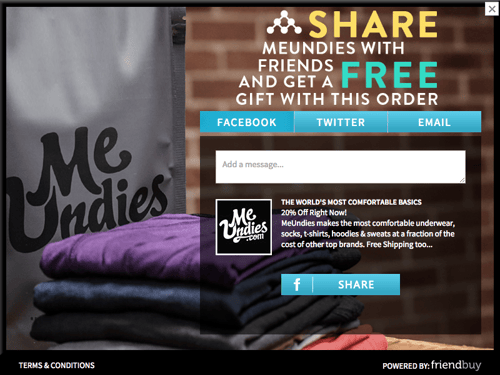 I'm partial to store credit as a referral "carrot" because it does double duty by preserving your margins and driving repeat purchase behavior. But in the interest of full disclosure so that you see as many options as possible, here are some more incentives to consider:

A Killer Referral Page is a Key Asset to Your Refer a Friend Program. Here’s Why.
Read

Which Kind of Referral Email Template is Best?
Read
See All Articles

Copyright © 2010-2021 Friendbuy All rights reserved.
made with in los angeles, ca